« STELLA!!!! Against the Odds
DON’T PASS ME BY JUST BECAUSE I AM OLD »

CAESAR MONTEREY: I BID YOU FAREWELL AND GODSPEED

This old dog was born on April 23, 2002. For six months, in 2008, he cooled his paws in the care of GSRNC awaiting his forever home. There were no takers; only lookers.

Let’s turn on the way-back-machine and visit the waning months of 2008. In early November the phone rang. It was Mike, my Area Dog Manager. Before the conversation began I already knew what was going to happen. Caesar had been in Rescue for over six months with no takers; lots of lookers, but no one willing to take on this not so old dog and his sundry list of issues; the list being plentiful and sobering. Skin, temperament, hips and the vets estimate on longevity; about two more years. Mike started the conversation as expected and explained to me what I already knew, Caesar was not a good candidate for finding a home. I expected Mike to tell me that Caesar would be moving to a different foster home and continue his search for a forever home in a different locale. Mike had a curve ball for me. Yes, Caesar was a problem child. But, he had already found his forever home, if we would accept. Accept? Absolutely. It did mean we would no longer be fosters; Caesar was a poor socializer.

GSRNC named him Caesar Monterey. His birth name was Caesar Vom Fleischerheim II. With a fancy given name along with fancy AKC papers one would think that this old dog is not just a common, run of the mill, dog; he isn’t. He is Mr. Caesar, our Golden Shepherd. Never heard of a Golden Shepherd? Neither had I. Our vet was familiar with this sub-breed and spotted his Golden pedigree after a few visits. You see, the Gold is not in Caesar, it is in my pocket, err from my pocket to my vet’s pocket. Mr. C has such a funny vet! 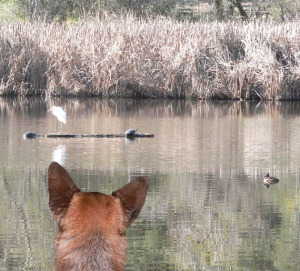 When I first met Mr. C he had difficulty walking along with a well developed rash that covered much of his belly. When we fostered him he was to have limited walks in our yard and no contact with other dogs (good thoughts did not enter his head as other dogs approached). He settled right in and adopted us as part of his family. Wherever we went, he was quick to follow. He spent his outdoor time sniffing the bushes, the grass, the weeds, the concrete; the dude had a fantastic sniffer. Sniffing the same bushes day after day never got old for him. Sticking close to us was just, well, normal for him.

After the adoption was finalized I could take action on a hunch of mine. Caesar was missing out on the thrill of living. He was an expert at making whatever situation he was in a good thing. Be it lazing around in the living room (a snooze was always a welcome pastime), or smelling the same flowers day after day. Whatever it was, he found a way to enjoy it. He also knew how to ignore his limitations, namely his bad hips. How to expose him to new wonders? That was the question. 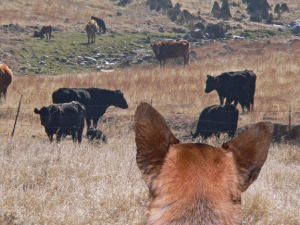 Walking, walking, and more walking, that’s what we did, day after day. Good for me and good for Caesar. A random question here: how can a GSD walk with his/her nose fractions of an inch above the pavement and never, and I mean never, get road rash on their nose? Nose, eye coordination has to be phenomenal. I have no answer, just wonderment.

Speaking of noses. It seems to me that Caesar’s sniffing abilities were unique. But, my experience in working with exceptional sniffers is limited to just Caesar. So, let me share my Caesar observations: Sniffing was not limited to simply sniffing the air. Oh, no, there was much more. Nose to target contact was desirable, no matter what. Yep, poop, dead things, rotten things, whatever, they all needed to be touched. Yep, I quickly learned leash control, and to keep a sharp eye on the ground. Oh, yes, there is more. Drippy nose syndrome and a bit of drool. When Caesar really got into sniffing he also got a runny, let’s make that very runny, nose and also rather drooly. I’ve concluded that if a dried-out object has some smell, then that same object, with a good wetting, will have even more smell. There were always wet patches on the ground after a Caesar smelling encounter. Nope, not done yet. There is more; the tongue. Remember that ‘contact’ thing? Well, it was not uncommon for Caesar to lay-his-tongue on the object of interest. He would just stick his tongue out and plant it on whatever he was interested in. The laying-of-his-tongue was not a short duration laying; he would let his tongue lay for many seconds. 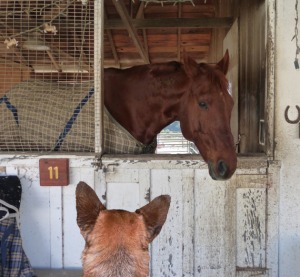 You go away. Come back and are greeted by your buddy which includes lots of sniffing. Caesar did that and, when necessary, added a twist. I do a fair amount of construction related work. Rarely wear gloves and occasionally come home with dinged up hands. Caesar is quick to greet and sniff. When his nose finds a scratch he very gently lays his tongue on the wound for a few seconds and then gently lifts his tongue. The process is repeated until he is satisfied with his doctoring or I tell him enough is enough. I must say, his tongue is very gentle. He takes his doctoring seriously and takes good care of his people.

The Chihuahua encounter. That’s what I call it. That’s what it was, an encounter. This took place while visiting family (out of town). I asked my pop if there would be any problems with walking Caesar in the neighborhood. Nothing he could think of came to mind. Off we went. Soon we were being stalked by a sweater wearing Chihuahua. He was pretty aggressive and not scared of Caesar. I am guessing he figured “the bigger they are the harder they fall”. He had a hankering to take Caesar down. After walking some distance the little guy disappeared and we could enjoy our walk. Just a few houses shy of our return the encounter took place. We were walking on the sidewalk, approaching a hedge separating two properties. As we passed the hedge I and Caesar spot the sweatered Chihuahua. He is to Caesar’s left and running at top speed on an intersect course. A few feet from Caesar he launches himself. He is a missile and on target. Caesar took one step back and caught that guy in mid air. Head sticking out of Caesar’s right jaw and his little butt sticking out the left. It took some work but Caesar did let the little guy go. Last I saw, the little guy was walking home; no longer concerned with “…the harder they fall”.

Once a year Roaring Camp holds a Civil War Reenactment. One of the events is shooting the canon; a very loud event. Well, Caesar and I happened to be in the right place at the right time, right on the firing line. We were warned that the cannon blast can be scary for dogs and it would be prudent to move back several yards. We moved back. As the cannon fired Caesar jumped forward and attempted to charge. Charge what? I don’t know. Scared him? Not in the least. To Caesar the cannon’s roar was more like a starter’s pistol announcing the start of a race and he was ready to race. 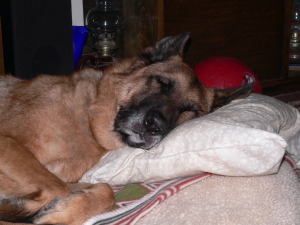 When Caesar naps he likes to prop his head against a chair, wall, or pretty much anything that will support his head. Experiment time: what will he do with a pillow? Stick his head on it and go to sleep, that’s what he will do. From that point forward, we always kept pillows on his beds. He loved them.

We have property in the Sierra Foothills. We named it Caesarville. It is the one place where he can be free to do whatever he wants without boundaries, neighbors, or other dogs. There is a small dirt road leading from the house to the workshop. I walk on the road. Caesar walks near me but off the road and in the grass. Grass that is about as tall as him. He loves it. You can see that he is in his own dream world and acting like a wolf taking slow and deliberate stalking steps. He can be very entertaining. 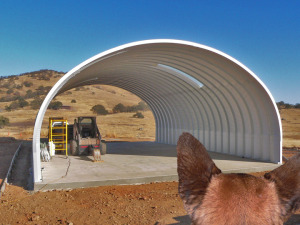 Costco has a food pavilion. They sell Very Berry Sundaes. This is his most favorite food in the world. Better than meat, better than anything else. It is so good that he closes his eyes while licking it from the cup. How do I know it is his favorite? An ad-hoc test was conducted. Very Berry Sundae vs Costco Polish Sausage. Which gets eaten first? You already know. It was no contest.

There is so much more to Caesar. I will leave you with one last memory. Dog friendly Motels. Get a room with twin (as in two, not size) beds. One for you and the other for your buddy. Bring your own blanket and spread it over ‘their’ bed. Invite them up (in Caesar case, help him up) and watch. There is no curling in a ball to sleep. Rather, it is head on pillow, legs outstretched, tail out and body angled in order to take up the whole bed. That’s my boy. 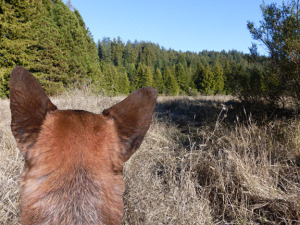 I’ve included some fun pictures of Caesar. Hope you enjoy them. Don’t take them too seriously.

Caesar was not spoiled. Pampered, yes. Spoiled, no. He was, and remains, my buddy. I bid you farewell and godspeed.

This entry was posted by ravikravik on February 2, 2016 at 6:45 pm, and is filed under Recent News. Follow any responses to this post through RSS 2.0. You can leave a response or trackback from your own site.