« Greta Was With Us Only Briefly, But She Accomplished Her Purpose
Mackenzie: Game On!! »

“Rudy T.” came into our lives on August 23rd, 2014. He had been picked up by Los Angeles County Animal Care and Control the month before. My husband Lindsay and I took our three small breed dogs to the home of Bob Jachens to meet Rudy and brought him home that same day.

Rudy came into the Thulani Program as “Dakota”. He had spondylosis, hip dysplasia, degenerative myelopathy and infected skin from embedded foxtails. His body had been shaved so his coat was coarse but his face was silky soft. 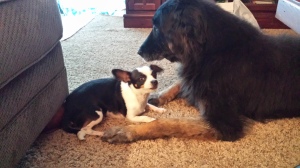 Rudy vocally notified us that he couldn’t stand being separated from us even by just a screen door. He loved snoozing on the lawn and supervised every step of food preparation in the kitchen. His best friend was “Dottie” a seven-pound Chihuahua mix. He loved grooming her which really just produced a slimey, spit-covered tiny dog.

Earlier this year Rudy developed a cough which was diagnosed as megaesophagus with secondary aspiration pneumonia.  Mornings involved the whirring of a blender to make his meals and medications into a slurry. I often wondered if the neighbors thought we had a heck of a daiquiri habit at 4 AM. 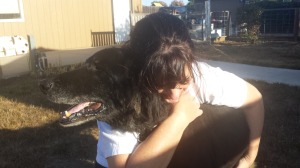 This past week Rudy stopped eating and water would not make it to his stomach any longer. On Friday, April 3 I  took him to the vet and held his beautiful head in my hands and kissed his nose until he stopped breathing and his heart stopped beating.

Later that day my husband said, “I can see there’s a breeze but it feels still.” We hugged and cried missing our big furry breeze.

This entry was posted by ravikravik on April 6, 2015 at 10:33 pm, and is filed under Recent News. Follow any responses to this post through RSS 2.0. You can leave a response or trackback from your own site.