A New Life For Jacco T. 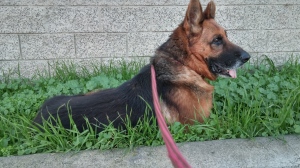 Jacco was rescued last Saturday and is now safely in the Thulani Program (thulanidogs.org), but unfortunately his ordeal is not over. He went through a terrible time recently, and probably even before that.   He was turned into the shelter severely malnourished and emaciated. He probably had been neglected for a considerable time. And then he was held in a shelter run for two months, on an evidence hold. Concrete floors, limited exercise, and limited human company—just a horrible situation for a German Shepherd. Today his muscles have atrophied, his hips are arthritic, he can barely walk short distances without dragging his hind feet and eventually falling. 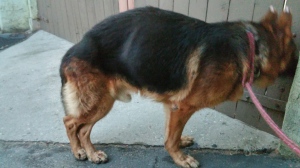 But his spirits are great, and he wants to be a regular GSD. He so deserves our help to recover!!!

Thulani is going to help him get there in any way we can. We don’t know how much of his mobility issues were caused by the shelter stay, but we are going to try to reverse the damage with good food, gentle care, and physical therapy. As you well know, PT can be expensive and time consuming, so if anyone can help us fund the PT, we would be very appreciative. 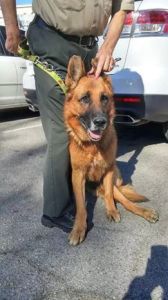 Bottom line, Jacco has awakened from his nightmare, and we will give him the best life possible.

It’s hard to remember that Greg T. is a foster dog. He’s the second best dog I’ve ever had in my whole life. (Who could replace the Mighty Fine Black Dog Constance of blessed memory? She was a forty- five pound black and tan shepherd mix with tan eye dots and feet, and white/gray/tan underbelly and chest and butt, and a white tail light, who was with me for nine of her thirteen years.) But enough about the MFBD Constance. The VFTD Greg is a 45-47 lb. German Shepherd/Malinois of an indescribable tannish reddish blonde color with pharaoh eye makeup. Very handsome. He has a pinched nerve midway down his back, which gives him problems in his back legs, with concurrent pain, managed with medications. Voracious appetite. Exceedingly healthy. A Very Fine Thulani Dog. 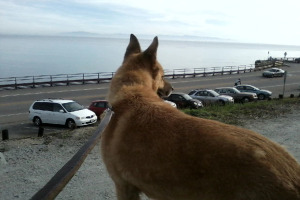 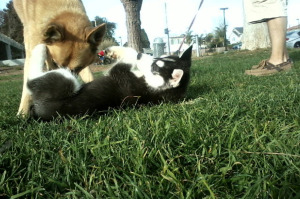 Greg has never seen a dog he didn’t want to meet. In the first part of the fourteen months he’s been with me, he loved to play with anyone who wanted to. More recently, he’s not allowed, lest he get dumped and twist his back. Sad Greg T. But oh, how it hurts when he gets knocked over. Greg can see dogs from great distances, long before I can, and suddenly, we are stopped still, waiting, with me discovering why until dog and person come into sight. The view of sky and ocean from “our” cliff is remarkable, so I get to take it all in while I wonder why we’re stopped. Over the months, Greg now has to, has to, greet Joey, Chloe, Zoe, Crystal, Bella, Bella, Bella, Bella, and Bella, Sunshine and Floyd, Bennie and Clyde (sic), Buster, Jack and Marley, Marley, Buddha, Frank, Maisie, Rosie, Rosie, Rosie, and Rosie (from fifteen pound terrier mix to Great Dane), Mowgli (R.I.P.), Trace, Rambo, et al., as well as all the others, visitors and friends alike. 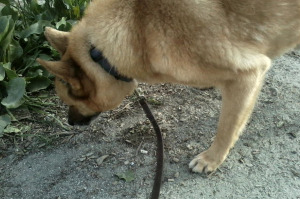 Or, it could be that Greg has heard or scented a Gopher, the Great Threat to the stability of the cliff. He has waited as long as forty minutes for the Gopher, aforementioned a Great Threat, to surface, even if it backfills its hole, travels underground, and digs a new hole a foot away. Greg usually pounces a few seconds too soon. Occasionally, he times it just right, and is immensely proud he has actually caught one. The Great Gopher Hunter abandons his trophy to warn the residual gopher community that it is Dangerous and they should find Another Place to Live. Or maybe that’s what he thinks. One never knows with a gopher dog. The requisite patience makes gopher dogs very rare, and the opportunity to learn their body language of satisfaction or intention is therefore equally rare. 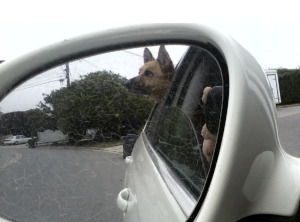 Greg Goes For A Ride

One thing that Greg makes very clear is that his car window should be opened. He loves road trips, however short, with head in the wind on the surface streets, garnering almost as much admiration as he does on the cliff. The sight of him in my rearview mirror entertains me every time. 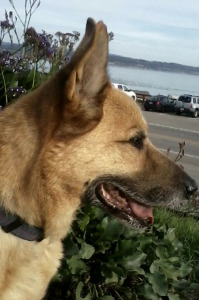 Greg Looks Out To Sea

Did I just mention admiration on the cliff? One of our regular walks is on the cliff above Capitola Village. Among the regular dogwalkers and bench sitters, Greg has many fans, not to mention the tourists and family visitors who frequent the path for views and magnificent photographs of the ocean, sky, and wildlife (some have thought Greg looks like a fox). Lots of petting, lots of treats, lots of foraging for any people snacks or cat truffles left behind, not to mention the life-threatening chicken bones, etc. Used to be, I was on constant lookout for bad snacks, and never got to look up to the sky or sea. The day he got a rotting bird carcass, a mussel shell, and a fast food ketchup packet, we came to an understanding. Since then, he wears his basket muzzle as a food filter. He sticks his snout in it as matter-of-factly as having his leash clipped to his collar. With it on, he can pant, yawn, and drink. If approved snacks come along, off comes the basket. Of course, if he goes into gopher hunt position, the basket is immediately removed for better gopher getting possibility. Yes, he does snout some people in invitation to have it removed. They don’t. If he fools me into taking it off, he’s nose to ground, snorfling for snacks; infrequently, he continues to pay attention to that human he was snouting because he remembers that person’s excellence as a masseur. Massage must be better than snacks. Understand, if you will, that walks always come after he’s already had a full meal. It’s not like he’s starving. They say he was abused in his first three years; perhaps food deprivation was part of that.

Greg Staring. At What???

My first two Thulani foster dogs were twelve years old when they came to me; each was very old.   Greg came to me at twelve years, and was very young. Many people thought he was a puppy. He’s still very healthy. Except. Except. The pinched nerve in his back has gotten worse, accelerating over the last three months. Now, he lets me lift him up and down the three steps to the porch, and in and out of the car. The increasing pain makes him a little more ornery. He sits down more often while I chat with people on the cliff. He still prefers the long walks, only severely crippling to manipulate against leaving the park; he doesn’t want to go home. What are drivers thinking when he can just barely make it across the street, or collapses right in the middle, while they wait for these two pedestrians? But if he sees a dog, up he gets and proceeds as if we were just starting out. Maybe I should hire a dog to lure him home each time…. After all, there was the day he got knocked over while playing and couldn’t walk for a while. We sat and rested. Then Rufus came along. Greg very slowly lifted himself to his feet and limped on over; he just had to go exchange sniffs with Rufus. That’s what I call a Very Fine Thulani Dog.

Over the months, a lot of people have wanted me to give Greg some or another miraculous method cure for his difficulty walking. After trying to communicate that it was his back, not his legs, and wanting to be polite, I hid behind saying that the Thulani program would probably not pay for homeopathy, acupuncture, hydrotherapy, etc., etc. Last week, Joan, a dogwalker, recognized Greg’s walk as the same nerve problem her previous dog had had, which had been completely solved with surgery. She gave me her dog’s ramp, suitcase handle harnesses for lifting Greg when he was having particular trouble, and an assortment of other goodies which are now at Thulani central for use with other Thulani dogs. At a recent visit to Greg’s regular orthopedic vet, we were told that Greg’s problem is now fully neurologic, and a referral was given for a neurology specialist veterinarian whom GSRNC has used before. 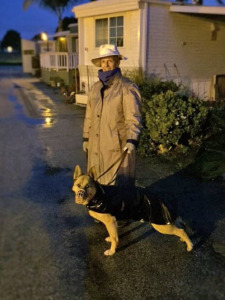 Here’s the good news. After a consult with a neurologist, the VFT Greg is now on prednisone and is walking sooo much better. On the other hand, he has to go out much more frequently, rain, storm, fog, or shine, dawn, dusk, or darkest night. I’m seeing some beautiful dawns and sunsets, and amazing tides raking the beach. But, oh the rain. Greg doesn’t mind the rain, but parts of him hurt in the being toweled off afterward; thus, he has a shiny new raincoat and could successfully audition for the roles of Zorro-Dog, Darth-Vader-Dog, or maybe Bat-Dog. But his most likely role for which to be Academy Award nominated is as the Very Fine Thulani Dog Greg T.

Joey Is Starting To Walk

Below is a video clip of Joey before he started his physical therapy.  Good Luck Joey!

I RESCUED YOUR DOG TODAY

I rescued your dog today…
The one you left at the pound;
The one you had for ten years
And no longer wanted around.

I rescued your dog today…
Did you know that he’s lost weight?
Did you know he’s scared and depressed
And seems to have lost all faith?

I rescued your dog today…
He had fleas and a little cold;
Guess you don’t care what shape he’s in,
You abandoned him I am told.

I rescued your dog today…
Were you having a baby or moving away?
Did you suddenly develop allergies,
Or was there NO reason he couldn’t stay?

I rescued your dog today…
He doesn’t play or even eat much;
I guess he’s very sad inside and
It’ll take time for him to trust.

I rescued your dog today…
And here he is going to stay;
He’s found his FOREVER home
And a warm bed in which to lay.

I rescued your dog today…
And shall give him all that he will need;
Patience, love, and security,
So he can forget your selfish deed.

2
by ravikravik in Recent News 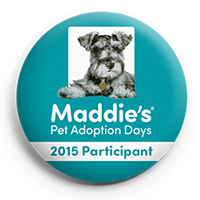