GISELLE T: NOT A BALLERINA, BUT A CELEBRITY IN HER OWN RIGHT 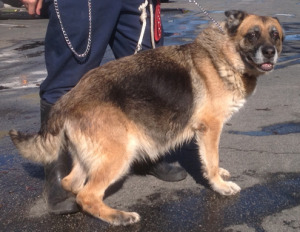 Out of the Shelter

Fortunately, unlike her namesake, our Giselle (T) did not die of a broken heart. In fact, she did not die of anything, although she seemed bound and determined to scare us with the possibilities.
.
Our Giselle is a 13 year old senior that was dumped at a shelter—not a great way to have your like expectancy enhanced (she did not yet need The Wills to bring her back). And there they discovered a huge foreign abdominal mass, one so large that they could not feel her various organs. Not looking promising.
.
Trying to prevent a need for the services of The Wills, the Facebook posse rode out on her behalf, saturating the blogosphere with hundreds of pleas to help her. What an uprising!
.
Better yet, Karen Barnes and the Thulani Program stepped up to rescue her and immediately took her over to the Pet Care Veterinary Care Center in Los Angeles for surgery. There they found not one, but TWO huge, grapefruit-sized ovarian tumors, and what looked like the remains of half a plastic food bowl in her stomach (don’t look at these pictures unless you have a strong stomach). At this point, things were looking pretty grim, but that was the low point.
. 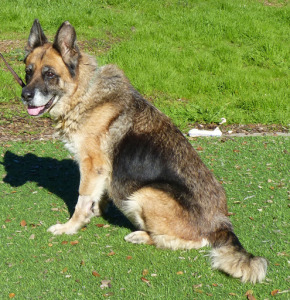 The surgery was successful, Giselle is recovering nicely, and—drum roll—THE TUMORS WERE BENIGN. Giselle is presently getting into mischief at her foster home and enjoying every moment of it.
. 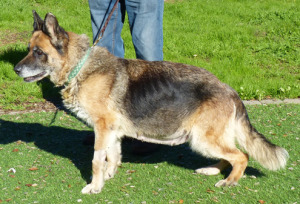 We may yet turn The Wills loose on the jerks that dumped her at the shelter, but for now, Giselle could care less. Please help us find a retirement home for her—all medical expenses will be paid for the rest of her life. 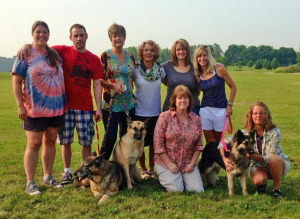 Some of the Miracle Workers

In the summer and early fall of 2012, a few people got together to see what they could do to help all the German Shepherds they were seeing that were dying in southern California shelters.  After talking for several weeks, they decided their best route would be to work with reputable rescues to move the dogs to places they could be adopted – where GSDs weren’t as common.  Their idea was to navigate the complicated California shelter system FOR the rescue.  Partner with the shelters, temp test the dogs, arrange with a rescue partner for the “pull”, arrange vet, board, and transport to the rescue – AND to raise the funds to do it.  They wanted to do this – to deliver the dog to the rescue – without the rescues having to figure all this out – taking away from the important job of taking care of the dogs, and getting them adopted.  Rescues already HAVE too much work to do!  After months of planning, Miracle GSD Network was formed, and “pulled” their first dogs in October 2012 from the Coachella Valley Shelter in CA for Southwest Michigan German Shepherd Rescue.

Miracle GSD Network only works with a select few rescues that they have thoroughly checked out, and have processes in place that employ good and transparent rescue practices.   Since 2012 they have built a partnership with several rescues and shelters, and with many people on the “ground” assisting with temp tests, fostering, and transporting. They have earned the trust of so many people in rescue.  This small group of people is spread out all over the country – Arkansas, California, Georgia, Indiana, Ohio, Oregon, Maine, Massachusetts and North Carolina.

Miracle GSD Network is PROUD to partner with the Thulani Program, to save Senior & Hospice German Shepherds – a cause near & dear to their hearts.  Miracle GSD Network is an “informal” organization dedicated to helping rescues navigate the difficult shelter system by coordinating “pulls” of dogs in need.  Visit (ask to join) our Facebook page – it is a HAPPY PLACE – where we post updates of all our “Miracle Dogs” – to date over 450 saved: