It was that close.  Here is what happened.

10/24/2014
Frank T. brought to the LA City East Valley Shelter as a stray
Scanned for microchip—none found
Frank could not stand or walk without collapsing

11/16/2014
Karen Barnes of the Thulani Program pulls Frank into the program. 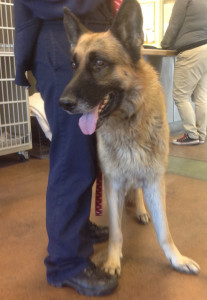 A close shave but Frank T. is safely in the Thulani Program.  He is 10 years old, alert, social, affectionate, and quite mobile.  In fact, we are now working on him not pulling me all over the place when out on walks.  He takes a ‘good’ walk, lots of sniffing and exploring, with an occasional check-back with me to make sure I am OK.  He is very handsome, well proportioned, and nearly a show-quality German Shepherd.  He is a bit aloof with people at the very beginning, but after just a few minutes, he shows his abundant social skills.  He is fine with other dogs, but pretty much ignores them once he has met them.  He has not shown much prey-drive, and actually may be cat workable.  He is everything a well-balanced German Shepherd should be.

Suspected testicular cancer must have been a scrotal infection. He is fine—no cancer 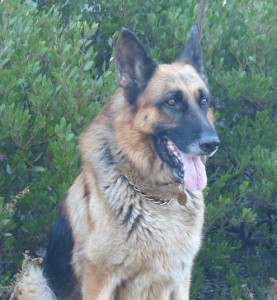 Frank T. is part of the Thulani Program, and as such we are looking for a forever home that will care for him for the rest of his life, in warmth and love. He will come with a supply of food, a cushy pad if wanted, and other goodies such as toys. His medical expenses will be covered for the rest of his life by the Thulani Program. If you want to learn more about Frank T., or are possibly interested in providing him a home in which to spend his retirement, please contact Bob at thulanidogs@gsrnc.org Frank T. is a level 2 dog.

This entry was posted by ravikravik on November 25, 2014 at 10:56 pm, and is filed under Recent News. Follow any responses to this post through RSS 2.0. You can leave a response or trackback from your own site.