« Eulogy For Nate T.
Dakota T.: The Other Desert Longcoat »

Bear T. loves to play ball—and he does it in a very smart fashion.  If you throw a ball for him, he will chase after it, pick it up, run back to you, and drop it just in front of you.  He then backs up a step or two and stares at the ball, waiting for something good to happen (like when you pick up the ball and throw it again). 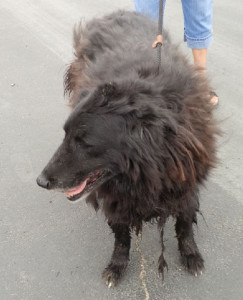 Bear T. and his likely littermate Dakota T. (another longcoat) came from the Lancaster Shelter out in the Mojave Desert.  Two weeks ago, they were longcoats, but today they look like newly shorn sheep.  Both dogs looked like they had never been brushed or groomed, and had deeply and pervasively matted coats filled with unbelievable loads of foxtails.  The groomers gave up trying to groom them and just ended up shaving them almost completely.  Since both have droopy ears, they now look more like Afghans than GSDs. 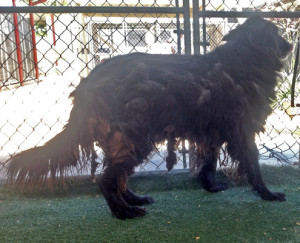 This entry was posted by ravikravik on August 8, 2014 at 9:47 pm, and is filed under Recent News. Follow any responses to this post through RSS 2.0. You can leave a response or trackback from your own site.