« SORRY
Rocky T. (Now Marty T.) Has Friends All Over The Country »

In The Game Of Chance: We Have A Winner

In games of chance, one occasionally will encounter long, uninterrupted strings of good or bad luck.  It is even rarer to encounter a long string of bad luck, followed by a long string of good luck.  But with Thulani dog Chance T., we may just have such a case. 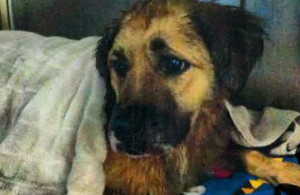 We don’t know for sure what Chance’s earlier life was like, but we are sure he went for a long time under very difficult circumstances.  He was found on the streets of LA, living next to a taco truck, sleeping on a plastic garbage bag, and scrabbling for whatever food he could find to keep himself alive.  He was underweight, had an open abscess on his cheek, and had a severe ear infection that likely was directly connected to the abscess.  When found, he was so frightened that he refused to walk and had to be carried. He was in bad shape and miserable. 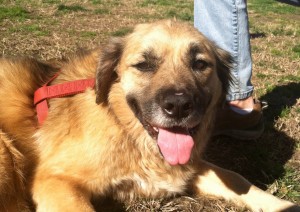 Chance after the shelter staff and volunteers worked wonders

But his string of bad luck came to an end when he was brought to the West LA City Shelter.  There the staff and volunteers went to extraordinary lengths to compensate for his physical neglect and mental trauma.  They started a quality and intensive medical intervention, while lavishing him with warmth and TLC.  They continued this for nearly a month, gradually restoring his faith in people and making progress on his ear infection and abscess.  And he put on weight.

When he was far enough along the road to recovery, they began a creative campaign to find him the loving home he deserves.  Check out the incredible flyers they put up for him.

The publicity about Chance caught Karen Barnes’ attention and we checked him out as a possible candidate for our Thulani Program (www.thulanidogs.org).  And he was!!  So Karen pulled him from the shelter and housed him in LA.  Which then brought us to the next task—how to get him up to the San Francisco Bay region where we could continue his rehabilitation, and begin the search for his forever home. 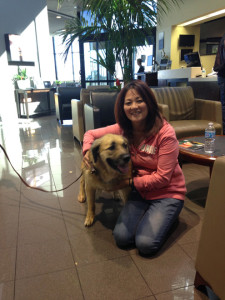 Chance’s winning streak continued when Bill Sutherland offered to help us transport GSDs in his private plane.  When approached, Bill was excited about being able to transport Chance and so the plans were set.  But at the last moment, Bill’s wife who was going to fly with Bill and entertain Chance on the flight, came down with a bug. 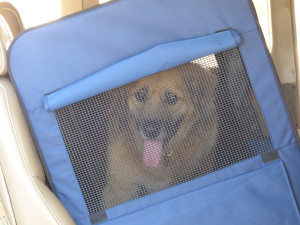 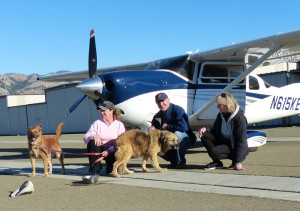 Had Chance’s string of good luck ended?  Not so.  Volunteer Maureen O’Neil stepped forward to be the flight attendant, and the doggie charter flight from Van Nuys to San Jose went off on schedule without a hitch.  In fact, Chance took the flight completely in stride and he and the crew were met in San Jose by an adoring welcoming committee.

Chance is now safely in the Bay area, getting the last of his medical issues taken care of, putting on weight, and enjoying the snuggling of his new but temporary family.  But that will not last long—he already has two serious suitors that are anxious to provide him his forever home.

So Chance’s good luck streak is uninterrupted, and the Thulani Program will make sure that it continues for the rest of his life.  Chance T. is a BIG winner, but so are all the people who helped him along the way.  Definitely a winning team in a game of Chance.

This entry was posted by ravikravik on February 13, 2014 at 12:08 am, and is filed under Recent News. Follow any responses to this post through RSS 2.0. You can leave a response or trackback from your own site.