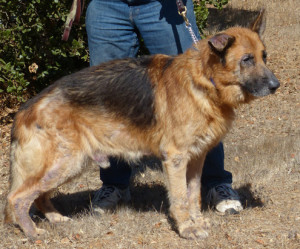 I’m sure you can write the rest of the Caesar’s story as well as I can.  But only that part leading up to today.

Caesar T. has been rescued by the Thulani Program. He is about 12 years old. He is emaciated, has serious skin conditions, infected ears, infected eyes, a weak rear end, and god only knows what else.    He is desperately in need of medical rehabilitation and tons of TLC.  Which we are more than prepared to give him.

In fact, in typical German Shepherd fashion, he already is making progress.  He was completely shut down mentally when Karen Barnes rescued him a couple of weeks ago, but he now gives tail-wags and seeks petting. He is making progress.    We will keep you informed how he is doing. 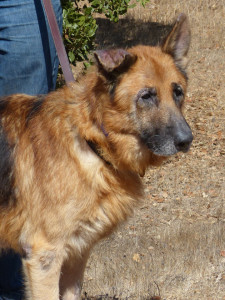 You can help by keeping Caesar T. in your thoughts and sharing his story.  He needs moral support from everyone.  But we know he will pull through and return to the handsome, noble German Shepherd he should be

This entry was posted by ravikravik on October 14, 2013 at 12:05 pm, and is filed under Recent News. Follow any responses to this post through RSS 2.0. You can leave a response or trackback from your own site.