Well, Thulani dog Angel de San Martin may be answering that question for us.  Sweet Miss Angel was rescued from the San Martin Shelter early in November of 2010.  At that time she was in poor shape, seemed very old, and was extremely lethargic.  I guessed that she only had a few months to live, and confidently assured her first foster mom Nicole that when the school year and summer job were done the following Fall, Angel probably would already have passed to the Rainbow Bridge.

Contrary to my prediction, Angel got stronger and more lively with the ensuing months, and by Fall she was raring to go.

So Angel move in with Suzanne and Jim and their pack of four dogs in the mountains west of King City.  The rural mountain air recharged her batteries and her spirit.  When baby Brian came along, Angel decided that her job was as granny-nanny-dog, and she watched over him and spent much of her time watching kiddy cartoons with him.

She also continued to give her love, loyalty, and devotion to the other members of the family, and became a central figure in all the homestead activities.  She was and continues to be the gentlest of souls. 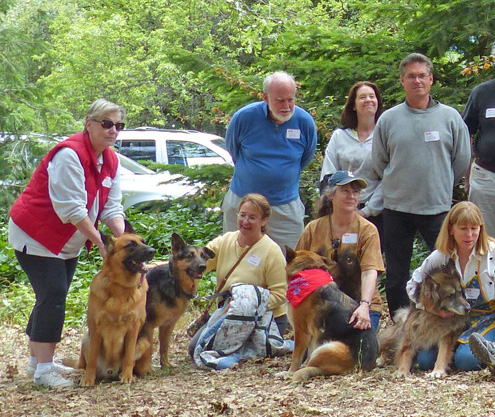 Angel and Suzanne (2nd from left). Joan and hostess Holly on right.

Now, two years and eight months later, she walks a bit stiffer, sleeps deeper, and has the lumps, bumps, and minor inconveniences that come along with old age.  But that did not stop her and Suzanne from making the trip up to Los Gatos last month to attend the Thulani part of the Rescue Reunion hosted by Joan H. and Jim R. every year.  The Thulani subgroup was hosted by Holly T, another Thulani dog that has happily outlived our expectations.

We should all take a lesson from Angel and the rest of these wonderful dogs—live in the moment, give out your love unselfishly, and enjoy the people and dogs around you.

This entry was posted by admin on June 12, 2013 at 5:03 am, and is filed under Recent News. Follow any responses to this post through RSS 2.0. You can leave a response or trackback from your own site.